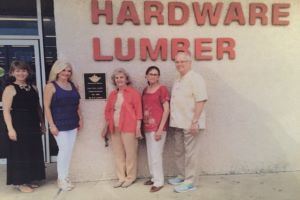 In the fall of 2013, the City of Deer Park Historical Committee was given the initiative by Mayor Jerry Mouton to identify historical spots of importance and to emphasize those locations with markers. Mayor Mouton also wanted the committee to obtain artifacts and information about our history and to preserve these items in display cases at city facilities. In 2014, the Historical Committee came up with a plan to produce its own type of historical designation by placing markers recognizing locations that were of importance to the city’s early history, but may not be eligible for Harris County Historical Markers or Texas Historical Markers. To date, the committee has issued 4 of these historical markers: 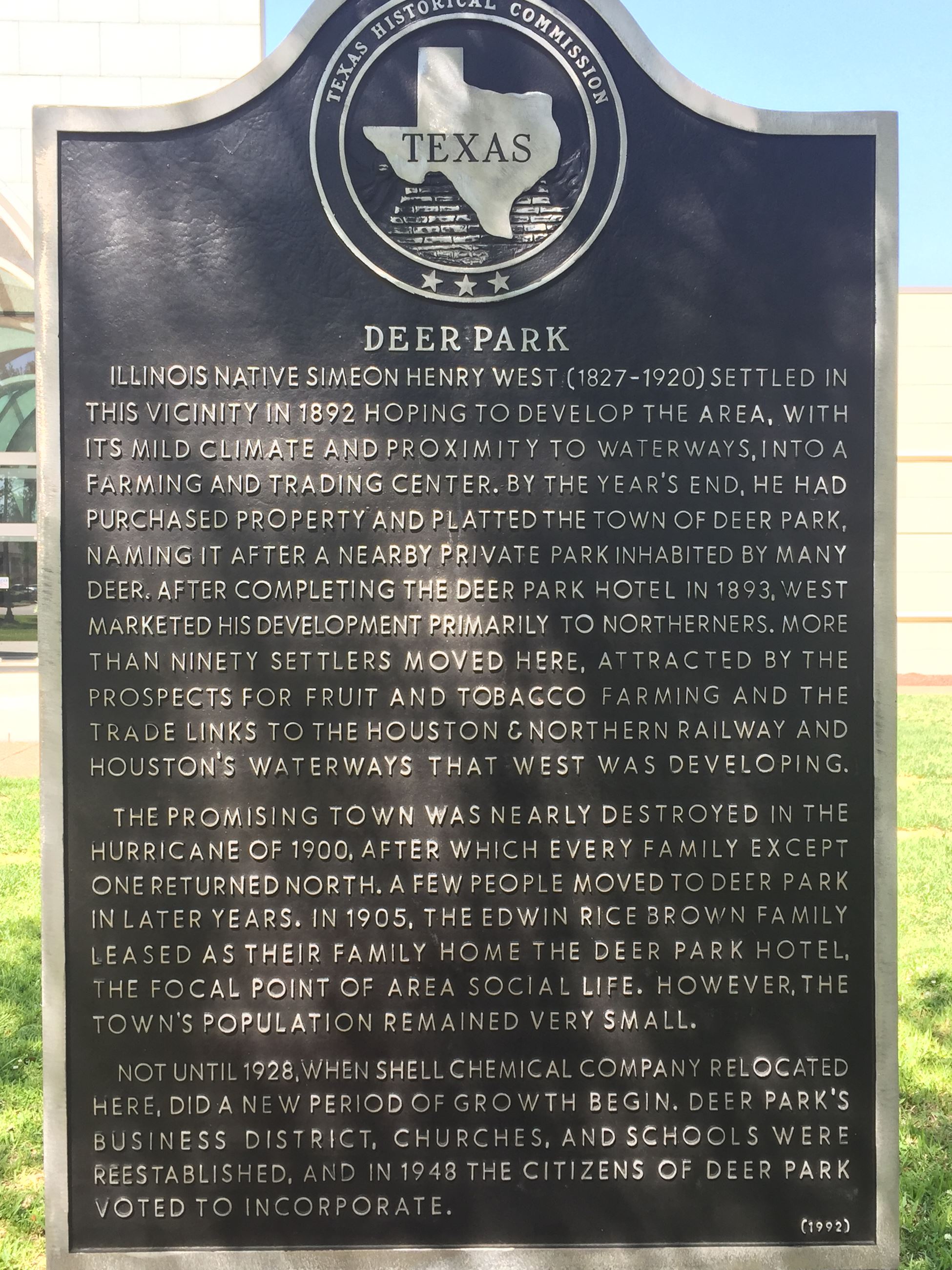 Marker Number 10647, Located at 1302 Center Street - Illinois native Simeon Henry West (1827-1920) settled in this vicinity in 1892 hoping to develop the area, with its mild climate and proximity to waterways, into a farming and trading center. By the year’s end, he had purchased property and platted the town of Deer Park, naming it after the large number of deer that roamed the coastal prairies. After completing the Deer Park Hotel in 1893, West marketed his development primarily to Northerners. More than ninety settlers moved here, attracted by the prospects for fruit and tobacco farming and the trade links to the Houston & Northern Railway and Houston’s waterways that West was developing.

The promising town was nearly destroyed in the hurricane of 1900, after which every family except one returned north. A few people moved to Deer Park in later years. In 1905, the Edwin Rice Brown family leased as their family home the Deer Park Hotel, the focal point of area social life. However, the town’s population remained very small.

Not until 1928, when Shell Chemical Company relocated here, did a new period of growth begin. Deer Park’s business district, churches, and schools were reestablished, and in 1948 the citizens of Deer Park voted to incorporate. 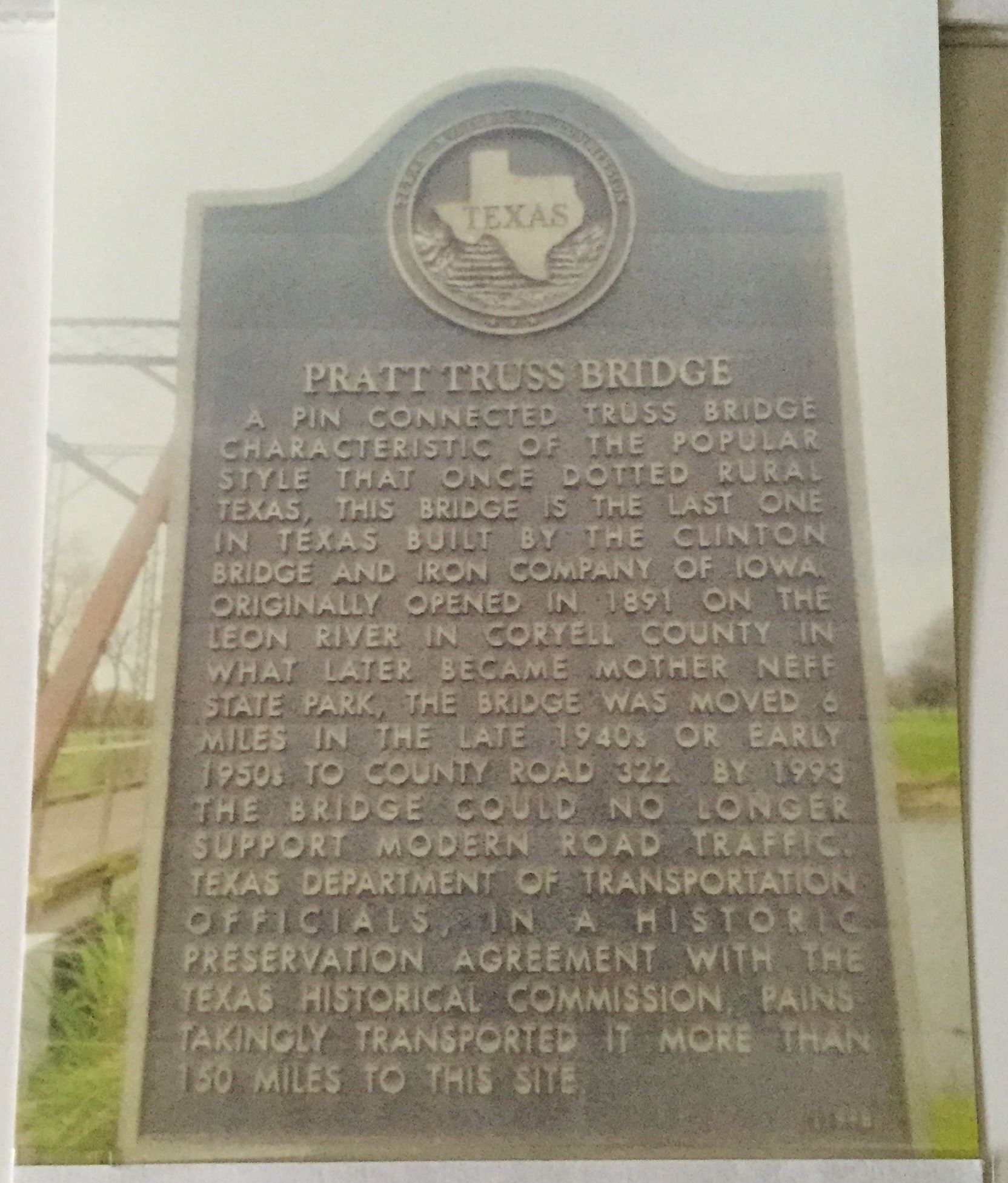 Marker Number 11958, Located at 1600 Georgia Avenue - A pin connected truss bridge characteristic of the popular style that once dotted rural Texas, this bridge is the last one in Texas built by the Clinton Bridge and Iron Company of Iowa. Originally opened in 1891 on the Leon River in Coryell County in what later became Mother Neff State Park, the bridge was moved 6 miles in the late 1940’s or early 1950’s to County Road 322. By 1993 the bridge could no longer support modern road traffic. Texas Department of Transportation officials, in a historic preservation agreement with the Texas Historical Commission, painstakingly transported it more than 150 miles to this site.

Simeon Henry West founded the City of Deer Park in 1892, which is around the same time 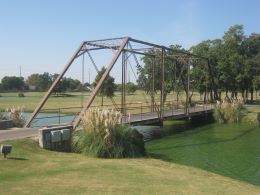 that this pin-connected iron truss bridge was built over the Leon River in Coryell County. Just over 100 years later in 1996, these two seemingly unrelated events of the late nineteenth century were linked together when the bridge reopened to the public at The Battleground at Deer Park Golf Course.The City of Deer Park applied for an official Texas Historical Marker for the Pratt Truss Bridge. On September 23, 1997, the Texas Historical Subject Marker was approved. The commission stated that this 1891 bridge was significant to Texas history and should be documented. To learn more about the history of Deer Park’s Pratt Truss Bridge, watch this video.

In 1935, the Texas Legislature created a commission and funded the Texas Centennial Markers to celebrate the 100th anniversary of Texas’ independence from Mexico in 1936. In 1923, a series of events and activities were planned in anticipation of the celebration as a result of an idea mentioned in a speech presented by Governor James Stephen Hogg. Every county in Texas participated with parades, speeches, festivals, and more. The celebration was so tremendous that President Franklin D. Roosevelt made a speech to mark this significant achievement in history at the Cotton Bowl to a crowd of over 52,000 people.

As part of the celebration, the State of Texas placed about 1,100 buildings, memorial museums, statues, granite and bronze markers, and monuments throughout Texas. There are several distinguishing characteristics that uniquely identify these 1936 historical markers, including shape, text, and a bronze star within a bronze wreath. These markers are an important part of Texas history and each marker tells its own special story. Today, the City of Deer Park proudly displays a centennial marker at Heritage Park in front of the representation of Patrick’s Cabin.

Site of the Home of Dr. George Moffit Patrick 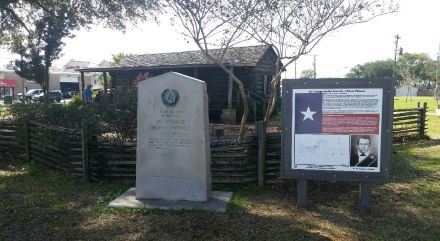 Marker Number 10752, Located at 1410 Center Street - Site of the home in 1836 of Dr. George Moffit Patrick, 1801-1889. Pioneer surveyor. Here the Texas army encamped after the Battle of San Jacinto and cabinet meetings were held.

The original 1936 Dr. George Moffit Patrick Centennial Marker was placed near the site of his cabin on Buffalo Bayou. In 1948, Rohm and Haas, Texas built their plant and the marker was moved to a nearby site. In the 1970’s, it was reported that the marker had been moved again. The marker was then crated and placed in storage. Sometime after, the marker was cleaned and placed on their property for the re-dedication in 1984. In 2009, Dow Chemical purchased Rohm and Haas. In 2016, Dow Chemical contacted the City of Deer Park and asked if the city would be interested in having the marker placed near the historic representation of Dr. George Moffit Patrick’s Cabin. At the time, the marker was not accessible to the public due to safety and security reasons. City staff requested permission from the Texas Historical Commission to relocate the marker. On March 7, 2017, consent was given for relocation. On April 27, 2017, Dow Chemical moved the marker to Heritage Park in Deer Park.

The City of Deer Park greatly appreciated Dow Chemical’s dedication and diligence in moving this 5,000 pound centennial marker to our location. We are honored to display a marker that represents such an important part of early history. 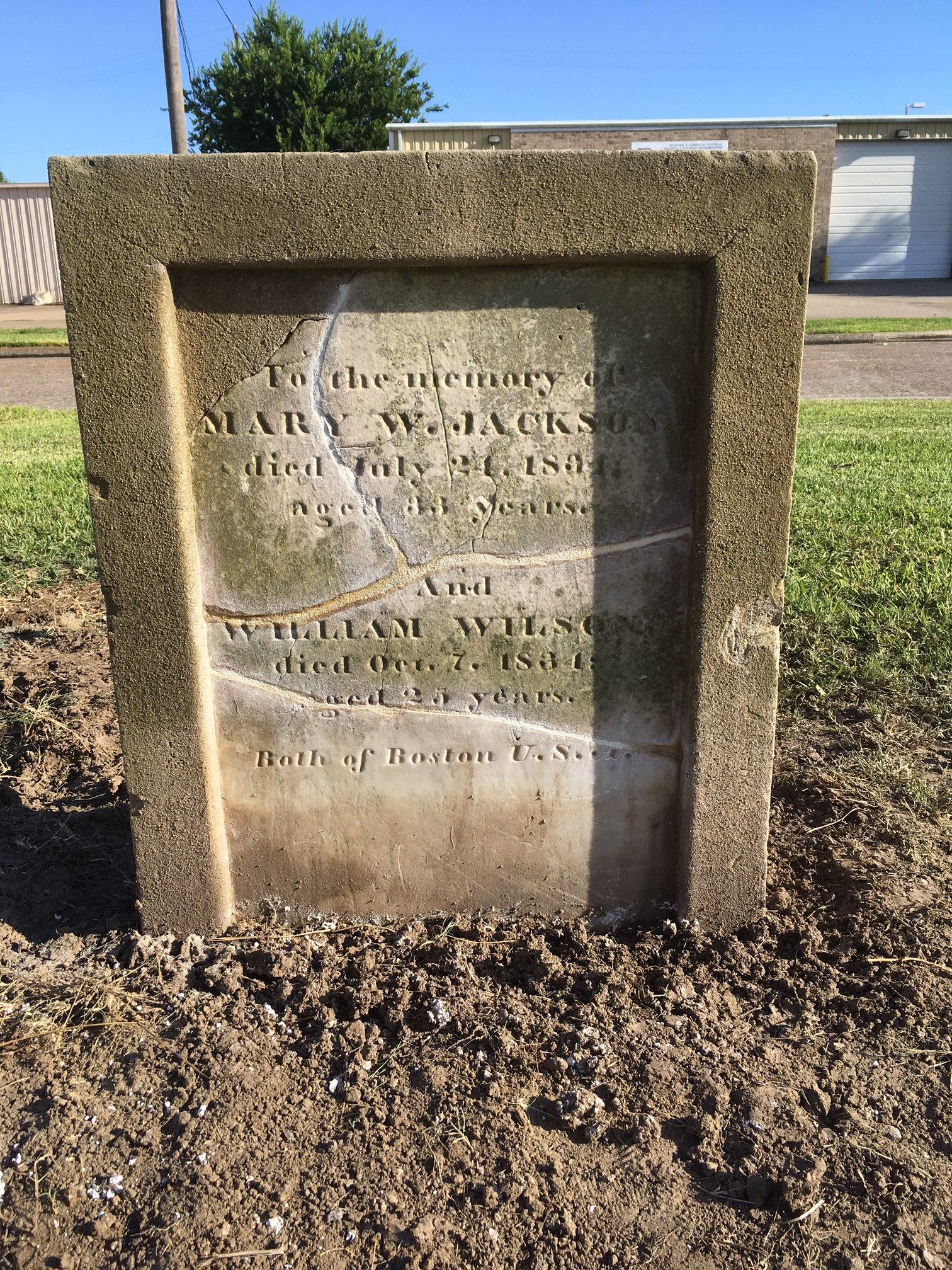 Marker Number 18931, Located at 610 East San Augustine - The City of Deer Park was established in 1892 near the San Jacinto Battleground by Simeon Henry West, although setters lived here prior to the official formation of the town. Two of those settlers were Mary Wilson Jackson and her brother, William Wilson, both of Boston, Massachusetts.

According to deed records, William Wilson owned the granted land (Abstract 838), which appears on early Harris County plat maps near the settlement of Crosby, the San Jacinto River and Gum Gully, neighboring "Old Three Hundred" settler Humphrey Jackson’s property. It is presumed that Mary W. Jackson was associated with Humphrey Jackson’s Family, based on a judgment recorded in Harris County Records in 1852.

There is also record of William Wilson purchasing property from the Thomas Earle Grant in what became Deer Park near what is now the Shell Refinery. Mary W. Jackson was living with the Edward N. Clopper Family when she died. William Wilson died several weeks later. The brother and sister were buried on the Wilson Property where the original site of the gravestone was discovered by Shell in 1928.

The gravestone of Mary Wilson Jackson and William Wilson, no longer in its original location, can be found at Dow Park in Deer Park.