During the May 7, 2016 General and Special Elections, the Fire Control, Prevention and Emergency Medical Services District was renewed by the voters of Deer Park for 10 years.

At that time, a new set of goals focused on personnel, fleet and facilities/equipment were outlined and are detailed below.

On February 14, 2011, the Deer Park City Council passed a Resolution approving the creation of the City of Deer Park Fire Control, Prevention and Emergency Medical Services District. Soon thereafter, the city council appointed seven members to serve on the required FCPEMSD Temporary Board.

A permanent board was appointed by City Council and charged with the development of the FCPEMSD Plan and budget in cooperation with the Deer Park City Council.

The board established an initial list of items for purchase, based on the Emergency Services Department’s requests for upgrades, replacements, or improvements that were previously postponed due to budgetary constraints. After addressing those goals, the department achieved nearly two dozen additional goals.

According to Emergency Services Director Robert Hemminger, the efforts of the FCPEMSD are focused on fleet/equipment, facilities and personnel.

During the next budget cycle for the FCPEMSD, the Fire Department and EMS will be focused on the following items:

“This year, we were able to bring on two full-time paramedics with district funding, along with two additional paramedics being funded through the City budget,” EMS Supervisor Andrew Smith said. “With these four new staff members, we have the ability to staff an additional ambulance unit 24 hours a day, seven days a week. This brings the total number of ambulances we can staff 24/7 from one to two.”

Smith said the additional paramedics will be a great benefit to the citizens of Deer Park.

“With a second ambulance running 24/7, we’ll be in much better shape when we have calls come in back to back,” he said. “As well, with the volunteer staffing we have, there’s a greater chance we will not have to call on mutual aid from areas like La Porte and Baytown.” 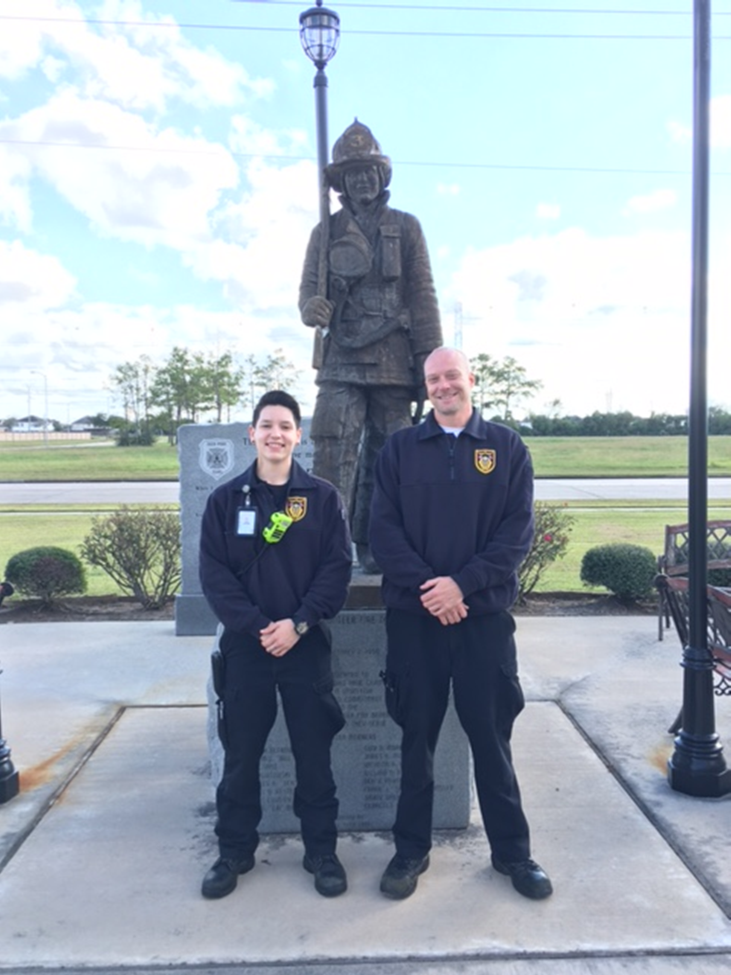 “During October 2016, the FCPEMSD Board approved replacement of our 20 year old, 65 foot ladder truck with a new 105 foot ladder truck,” Fire Chief Don Davis said. “This truck will be similar to our existing truck in that it will be built on a single axle chassis, allowing it to be maneuvered on many of the narrower streets in the city. The advantage though is that with the extended reach of the ladder, 65 foot to 105 foot, it will be much more capable of fighting fires on homes that are further off the street as in some newer subdivisions. The longer ladder will also improve our elevated rescue capabilities. Delivery of this new truck is expected in November 2017.

“We will be keeping the older ladder truck as a reserve ladder/pumper in order to have a fill in truck should one of our other trucks need to go out of service for maintenance.”

Schematics of the new fire truck to be added when available.

Re-chassis and refurbish of one ambulance unit

Three of the four DPVFD ambulance units received improvements this year due to FCPEMSD funding. Medic 2 received a new chassis, and its patient compartment was refurbished with new flooring, upgraded lighting and a new paint scheme with reflective striping. Medic 3 and 4 (pictured) also received the new striping.

According to Cheri Perches, Deputy Chief of EMS, the department purchases and maintains ambulance units with the intention to save money and incorporate new technology/equipment as required.

“When we purchase ambulances, we do so with the intent of refurbishing the patients’ compartment and remounting it to a new chassis or engine so it can be used for multiple years,” Perches said. “This approach not only saves taxpayer money, but also puts a process in place to incorporate any changes that have occurred over the years since the compartment was last refurbished.” 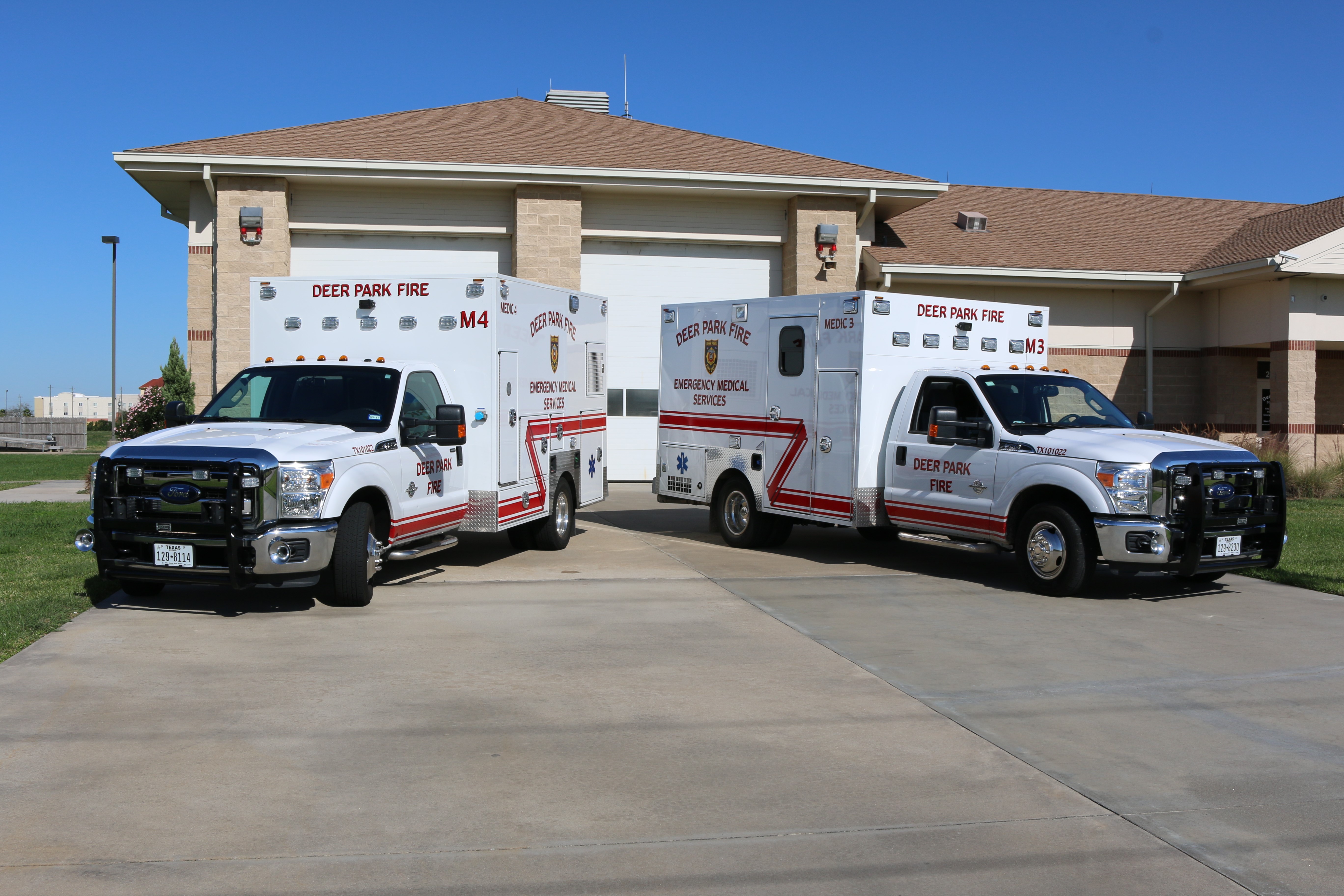 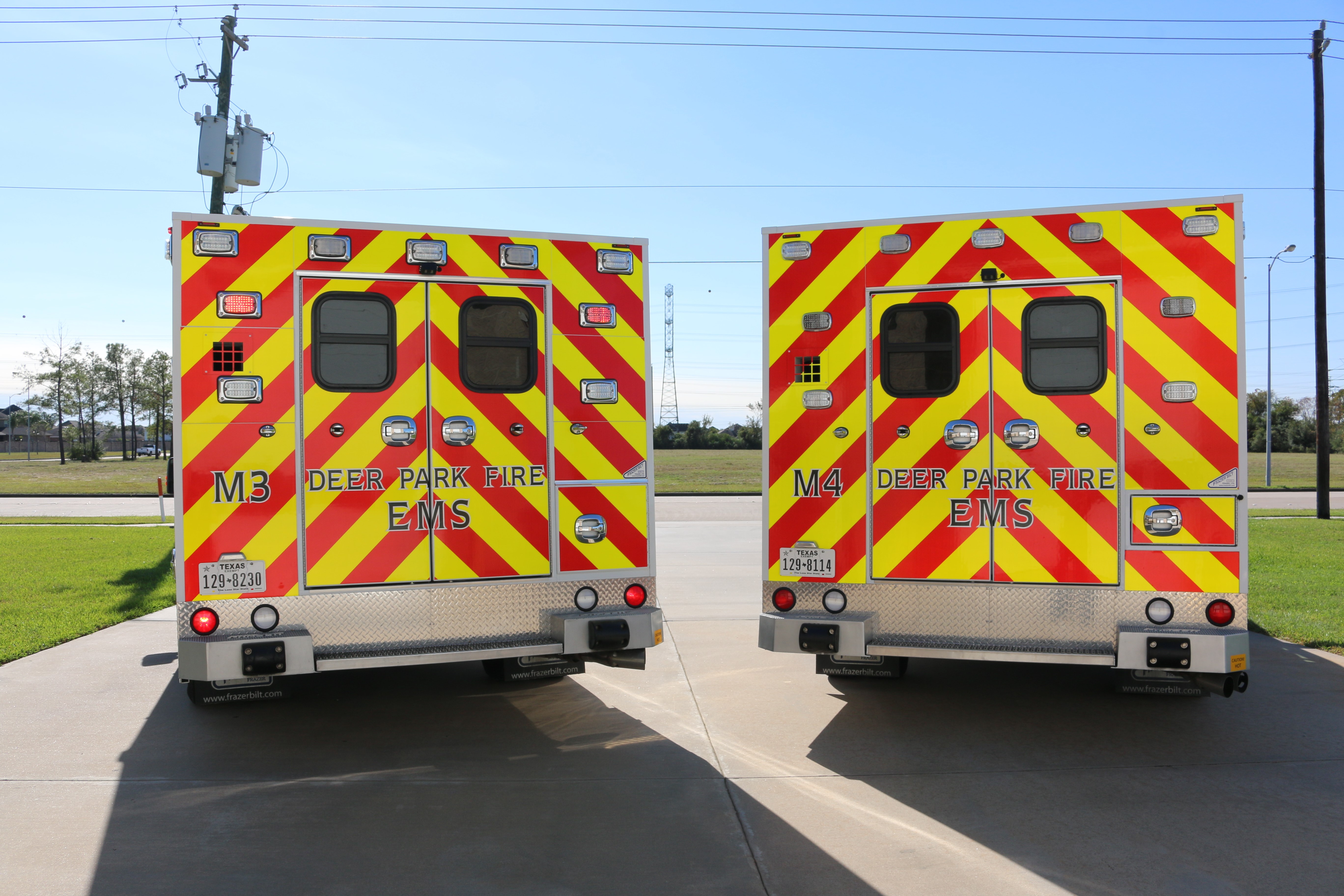 “Utilizing Fire District funding, we will now be using a Sparky the Fire Dog ® Robot in our outreach programs to local youth,” Fire Marshal Buddy Rice said. “The robot will be used at most fire prevention events, from parades and festivals to more formal programs such as school and day care classes.

“Any tool that can be used to get kids’ attention and to teach fire safety is a good thing, and this robot definitely makes an impression.” 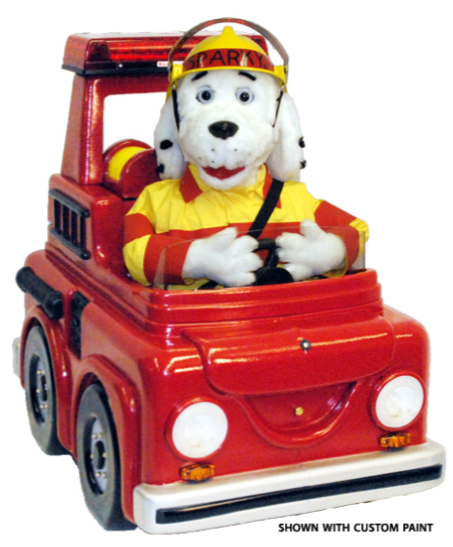 “These equipment upgrades will provide us with safer and more comfortable stretchers and chairs for our patients,” EMS Supervisor Andrew Smith said. “The side rails on the new stretchers swing out as opposed to moving up and down, so they will easily adjust to the size of each patient. They’re made by Stryker EMS, a company that’s becoming the industry standard in our field.

“The stair chairs, which are used to get people out of tight spaces, will also be easier to use and safer because they will include foot supports.”

Completion of remodel project at Station 1 to modernize the station

“The funds approved for the remodel of Fire Station 1 have truly served to bring life back into the station,” Deputy Chief Clyde Coxie said. “As the station is utilized for many Fire Department meetings, auxiliary meetings and gatherings for various City departments including the Deer Park Police Department, we wanted it to look as nice as possible.

“The remodel is being conducted in two phases - the first will improve our entrance hallway, meeting room, kitchen and bathroom hallway, and the second will update our radio room, breathing air room, sitting area and women’s restroom.” 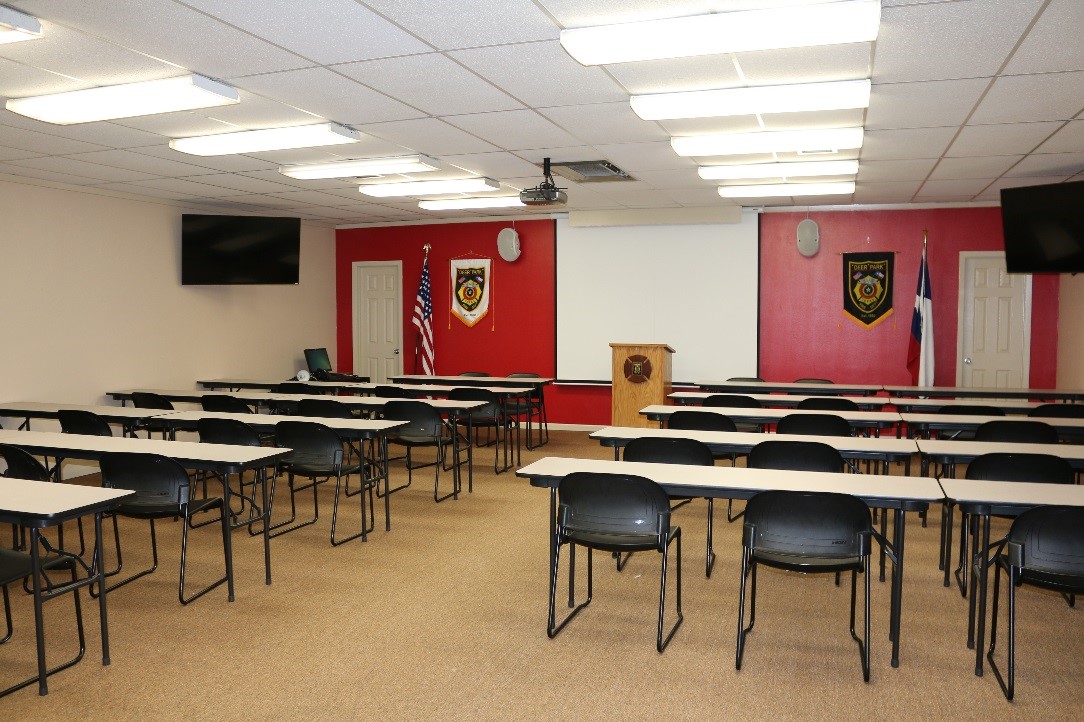 Replacement of the emergency generator at Station 2

“The new FCPEMSD budget will allow us to replace the backup generator at Station 2,” Fire Chief Don Davis said. “The existing generator is very old and not functioning as it should. The new generator will power the entire building during power failures. This is especially important during extended foul weather operations where power may be lost for multiple days. This allows our emergency response personnel to stay at the stations while providing response capability to the citizens of Deer Park.”

“The fire training "burn" building is a building that is designed to allow us to burn hay and other material inside without damaging the structure of the building,” Fire Chief Don Davis said. “This allows our firefighters to train in conditions similar to those that they’d expect to be exposed to in real structure fire situations.
“Fireproof panels are installed throughout the building. About once every five years or so we have a specialty engineering company inspect the building to assure that it’s still in safe condition. That inspection is very thorough and is based on the amount of use that the building gets throughout the year. This year’s inspection report indicated that the building is still in very good condition but there are some fireproof panels that need to be replaced as well as some hardware that holds the panels on the building. A purchase order has been issued and that work should begin by early 2017.” 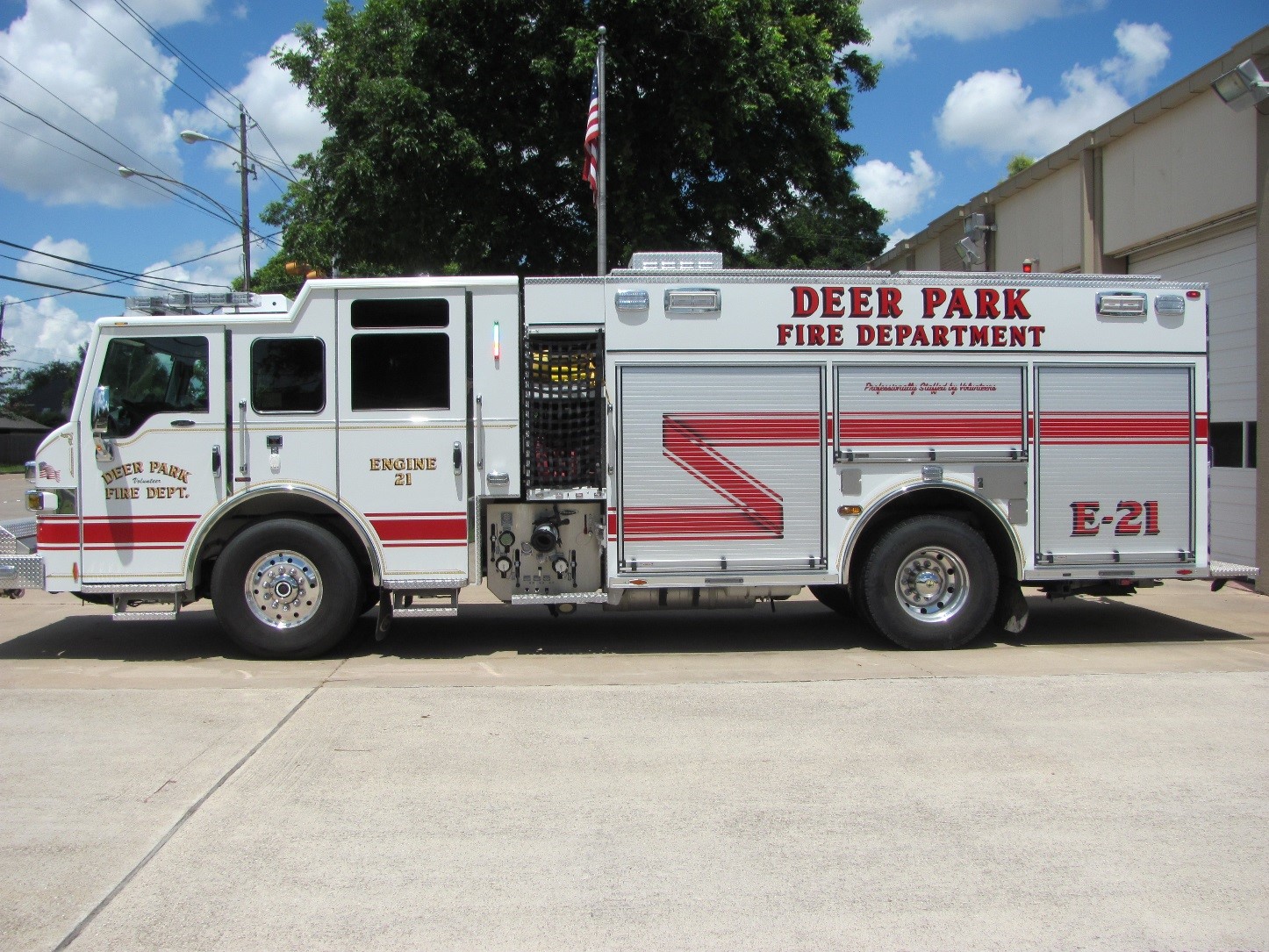 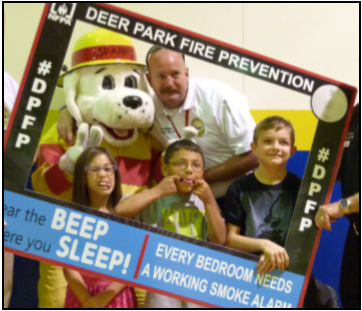 As the Fire Chief of this department, I want to express the importance of the FCPEMS District and how much of an impact it has made not only on the department but also the citizens we serve. Without this funding, we could not maintain the equipment at the level we currently have. Our Emergency Medical Services could not provide the quality of service without the additional personnel. The Fire Marshal’s Office would not be capable of ensuring inspections were completed annually and the level of community education would not be available. The fire department would have to find alternate means to fund replacement firefighting gear and equipment. With the purchases made during the last five years, we have been able to work towards an improved ISO rating for the city.

This is key to how insurance rates are measures for home owners. We are working towards moving from a rating of 4 to a rating of 2 which will reduce the overall cost of insurance for all home owners and businesses within the next two years.

Funding provided by the district allows the departments to improve services without placing a complete tax burden on the citizens of Deer Park. Funds currently collected allow the department to operate effectively without requiring additional funding from the general City budget.

With this benefit, not only does the fire department benefit, all other City departments benefit as well. Our future goals with district funding are to continue to fund the replacement of ambulances and fire apparatus, building improvements and additions, along with continued growth of EMS staff who provide emergency medical services to the citizens of Deer Park.

Plans to expand Fire Station 3 are also part of future goals using FCPEMSD funds. Improvements at the fire training facility to provide a greater quality of training to all personnel will be a key target as well.

Having previously served as Fire Chief for the City of Deer Park, I know how important it is to have this funding available without having to raise the tax rate or impact other departments within the City. So I’d like to thank the citizens of Deer Park for allowing this funding to continue for the next 10 years. Without your continued support many of these projects would not have been possible.